Great day yesterday at Galgorm Castle for Northend United Youth Football Club Golf Fundraising day.
It was a pleasure for slemish design studio to sponsor the first hole to help them a little

Apart from playing worse than Europe’s Ryder cup team.. It was fantastic to catch up with some old friends from football “back in the day”

look forward to next year’s outing!!

All held at Ballymena Showgrounds!!
Best of all tonight is that along with all the young & hopefully future stars….there is a team in each final from Northern Ireland. With any luck there’ll be a sell out crowd and some decent weather

Since the Milk Cup started back in 1983 it has attracted entries from Clubs and Nations all over the world.
Now with it in it’s 30th year, all us locals in Northern Ireland & those that visit for the tournament, have been amazed to see some of the young players “make it big”
In the United team one year was bursting with future stars including Nicky Butt, Gary Neville, Paul Scholes, Robbie Savage and Ben Thornley as well as our own Colin Murdock and Keith Gillespie.
Eight of the England squad at World Cup finals in South Africa played at Milk Cup –Wayne Rooney (with Everton) Joe Cole (West Ham), Michael Carrick  (West Ham), James Milner (Leeds Utd), Aaron Lennon (Leeds), Jermain Defoe (Spurs), Peter Crouch (Spurs), Ledley King (Spurs).

So all in all it’s one of the best youth tournament in the World. 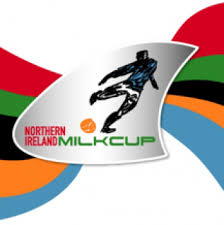