this planning “law” could affect a lot more sites!!

The site of the former Strand Hotel, for many years an eyesore blighting Portstewart, has been demolished.Demolition of the site, which was abandoned over a decade ago, came about through Minister Attwood acting to ensure that a Completion Notice, a power held by DOE Planning, was served.

Alex Attwood explained: “After fourteen years, the Strand Road Hotel eyesore is no more. Some months ago my planners served, for the first time ever, a Completion Notice on the developer of the site, abandoned over a decade ago. This site was a blight overlooking Porstewart’s majestic beach. The situation was intolerable.

“The Completion Notice was served because the developer had ignored requests to clear and clean the site when £400,000 was spent on dereliction this time last year, in the run down to the Irish Open in Portrush and Portstewart. The developer did not budge. That is why I acted. The Completion Notice requires construction to be completed or planning permission would be revoked, which in one move would collapse the value of the site.

“The developer appealed the notice and a hearing on the Completion Notice is before the Planning Appeals Commission (PAC) next week, on 8 May. In recent weeks however, my planners have been contacted – not by the developer – to move the situation on. I made it clear through my planners that the buildings must be demolished to foundation level and the site cleared and landscaped. I acknowledge that those who contacted my planners have now acted and the site is being cleared.

“The location is one of the most wonderful on the North Coast, damaged by this eyesore. As we come into the summer, this will now look different and better. I want to acknowledge the representatives and residents who long campaigned for action.

“I will now look to see whether the same approach (of serving Completion Notices) can be deployed on other problem sites. In addition, next week, I am holding a summit for Councils – so that all Councils do what Belfast City Council does, deploy their substantive enforcement powers against eyesore sites. Good enforcement is the flip side of good planning. Today is an example of that.” 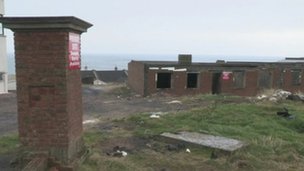